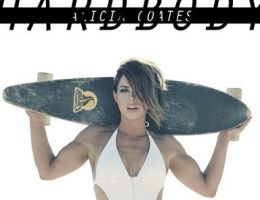 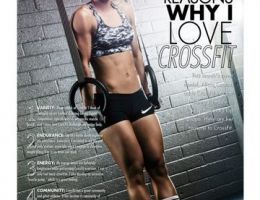 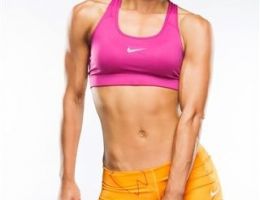 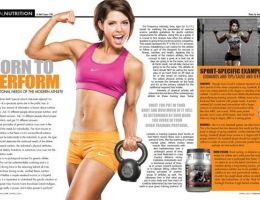 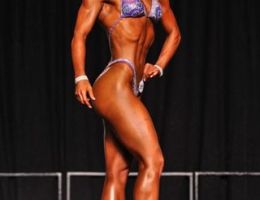 Category you compete in: Figure

I was born to newly married hardworking kids, Les and Becky Coates, in Phoenix, Arizona on November 6, 1986. I am the only girl and middle child of 3 kids; which may explain my utter nuttiness. My older brother, Remington, was definitely my partner in crime; he and I were in school detention quit often together. My younger brother, Braedon, is a bit younger than me; he is the baby of the house and Remington and I couldn’t help but tease him daily.

I was a very active little girl; as soon as my parents agreed I was coordinated enough to play on moving objects I began roller-skating and skateboarding. I was soon giving my brothers lessons and teaching the neighborhood boys how to build box ramps…boy was I trouble!

As a young girl I played every sport under the sun. My father forced me into tennis and golf lessons, I was actually pretty good, unfortunately I had no motivation to continue. My true enjoyment was running against the boys; soon I was dominating the soccer field and conquering the basketball court. Though I thrived in sports I was only able to participate on the playground and at school intramural events. My parents were strong believers in moderation; they wanted their kids to enjoy being active and not feel pressured by coaches. Club sports were never an option; it wasn’t until junior high school that I was able to participate on a team.

I attended Millennium High School in Goodyear, AZ for 3 years. It was there that I ran Cross Country and was published numerous times in the local and state newspaper for my running accomplishments. During the winter months I played as point guard on the varsity basketball team. Track and Field was my true passion, and when the springtime hit it was my time to shine. I ran the 4x400m relay, open 800m, 4x800m relay, and if my coach needed me I would run the open 1600m. I raced in the state championships every year.

I transferred to St. Mary’s High School in Phoenix, AZ my senior year. I was accepted and participated in the Phoenix Honors Cotillion while attending St. Mary’s; but I was ineligible to play on any sports teams. St. Mary’s had the best girl’s basketball program in the state of Arizona, and it was a massive disappointment that I couldn’t be apart of it. I was lucky enough to have great media attention in the newspaper while at Millennium High School, and I was offered numerous scholarships to run at the Division II and Community College level following high school.

My running career while in college was short lived. I attended Gateway Community College in the fall of 2005 to run cross-country. I then transferred to Glendale Community College spring 2006, where I ran track and field and finished my Associates Degree and Personal Training Certificate. During my last year of running, spring 2007, I pulled my hamstring severally. I knew this was a sign to a path of something new and challenging. The weight room quickly became my new “high”… I haven’t looked back since.

While continuing my education at Arizona State University towards my BA in Exercise Science, I ran across a fitness magazine in the grocery store. Intrigued by the physique of the woman on the cover, Jennifer Nicole Lee, I found myself buried in each and every page wanting to learn more. I soon became absolutely captivated by the idea of competing and having a body like these women. I was determined… determined to challenge myself mentally and physically; it was on!

The Road to Competing - Pro Bound

I quickly began googling and researching competition teams around the country; ultimately discovering AZ Pro Physiques in Mesa, AZ spring of 11’. I met with contest coach Damian Segovia and we set a goal; lean out and walk on stage as a serious competitor. Unfortunately, I was a distracted and lost in my life. I was in a 6-year relationship that was falling apart, in-between jobs, living at home at 24, and was completely unhappy. I knew I would have to make some serious changes in my life before I could embark on this journey…

The summer of 12' I reevaluated my training and became serious about competing. I decided to compete in the bikini category, which was totally terrifying, due to the fact that I knew nothing about walking in heels, having a stage presence, or being “sexy”. I began watching YouTube videos of IFBB Pro bikini competitors, I studied each and every girl that was a successful, and I would rehearse their walk, their attitude, and their swag daily.

November 12' had arrived and I was finally stepping on stage as an NPC bikini competitor at the Miles Productions Western Regionals in Mesa, AZ. It took every bit of confidence and mental strength to walk on stage and believe I was the BEST! I was beyond terrified, and like to majority of the other girls I was hungry, nervous, and looking forward to a big hamburger following the show. By the end of the night I had won Bikini Class D and was competing for the overall title. I did not win the overall title, but I sure was happy to take 1st in my class.

Following my bikini win, I quickly realized that I was not willing to sacrifice my body’s ability to gain muscle. I happily made the jump to figure, where I could lift heavy and gain mass. I competed in one more Miles Productions show March 13', where I placed 3rd in Figure Class D. Focused and undiscouraged I continued to push forward with my training.

Following my figure debut my coach and I quickly made the decision to move ahead and enter my first national show. I traveled to Chicago, IL to compete in the NPC's Jr. Nationals for my chance to become an IFBB Figure Pro. Prior to leaving I was told by numerous people that I was, “too small”, and that, “I wasn't at the level to become a pro". Little did they know that when I stepped on stage I would blow up like a puffer fish. By the end of the night all of my cards had fallen into place. I wasn't the biggest girl on stage, but, the head judge liked my look, and out of 24 competitors I came out the winner…one of the proudest moments of my life.

I am beyond ecstatic to announce my Pro Debut this November 13'. I will be participating in the Miles Productions IFBB Felicia Romero Figure Classic/Western Regionals in Mesa, AZ. It will definitely be surreal making my debut in my hometown, and walking the same stage where it all began just one year earlier.

Recognizing Those Close to Me

I am fortunate to have such amazing people behind me and I want to thank them!

To my boyfriend and local firemen, Tom Teichmann, I appreciate you and how unbelievably supportive you have been through all of this! I love you boo!

My parents, without you this would have never been possible. Thank you both for sticking by me.

My coach, Damian Segovia, and Team AZ Pro, I couldn't have asked for a better support system.

And, last but not least, I want to thank Miles & Kim Nuessle/Miles Productions for giving Arizona the best NPC shows in the nation. You never fail to impress when it comes to stage themes, which are always incredibly innovative and entertaining. Your staff has always been helpful and extremely professional, which has turned back stage ciaos into an absolute breeze. Thank you for all you do for the NPC and the State of Arizona.